“Thank you for your honesty.”
—Yvette

Yvette is a Chaperone from Arland.

The elderly and infirm Dowager Countess of Arland serves as one of the four Chaperones. Despite appearances, she seems intelligent and capable.

The Dowager Countess sits in a strange contraption that looks like a wire-made chair with large wheels, her legs positioned with unnatural stillness. Her body is thin and frail, and age has whitened her hair. Bright eyes peer over her spectacles, taking in the room.

A Kind, Humble, intelligent and capable lady with a reputation for disliking travel, but being an avid correspondent.

The MC has 4 options to interact with the Dowager Countess, asking about history is the best option as the MC gains insight. Afterward, The Dowager Countess would ask of the MC's opinion of the Summit which could increase Weaver's approval, Historian's approval or just the MC's humble personality.

For dinner, MC is seated between the Dowager Countess, who spends most of dinner pretending to be much more deaf and dumb.

The Dowager Countess Yvette would roll up to the MC, a slight smile on her face. Thanking the MC for thinking to include an old lady.

No matter how bad the lecture was, MC would earn the Historian's approval.

Having a public ambition of witnessing history would raise the Historian's approval, though it must be noted that MC has to have 50 manipulation if she is lying.

Secret Scene - Whisper in the Library[]

If MC has at least 50 Intelligence, she would eavesdrop the snippets of the strangest conversation between the Dowager Countess and Jasper. MC couldn't make out much, but there was something about responsibilities and oaths. It was strange, but not as strange as the fact those particular two were conversing at all.

“Do you gamble, MC? Shall we wager on who shall be the last to make their arrival and how long they will make the rest of us wait? For myself, I would put the odds on Lord Blain. He seems overly fond of beautifying himself and far less fond of mornings.”
—Yvette's first words Sadly, the Dowager Countess no longer rides. In fact, she revealed she used to love riding, which ironically caused her to be wheelchair-bound when she was no older than MC's age and just newlywed.

If MC picked the third option I think there is much to be learned from the stories of days long gone, Lady Yvette. Melancholy or not, so long as they are true, she will gain +5 insight.

The Dowager Countess has a gift for the MC if the Historian's approval was high enough.

“Jasper hands you a plain package, that opens to show a book covering the history of the Summit for the past hundred years.”
—Yvette's gift “I thought this might be of interest to you. I have no doubt that you already are someone who looks to the past to gain insight on the present and future, but perhaps you will find the history in this book particularly helpful this week. But since I’m not supposed to play favorites, let’s keep this between us. Yours, Yvette.”
—From Yvette

This gift gives a +10 boost to MC's historical knowledge.

“The Dowager Countess is pleased to accept your invitation to the tournament.”
—Yvette's reply to the Onvu Tournament “Ultimately, it is the Dowager Countess who claims victory.”
—Yvette's winning quote to the Onvu Tournament “Thank you for inviting an old lady like me. The thrill of competition almost made me feel young again.”
—Yvette's quote after the tournament Strangely, she would only raise the Arland approval, not the historian approval.

“The Dowager Countess Yvette has sent her best wishes for your event, but regretfully declines the invitation.”
—Yvette's rejection for the Girls' Night and Midnight Picnic.

Playing as A Sheltered Princess, she would recognize the title and have met her grandson, the current Earl at court, but she had not met the lady herself till the Summit. 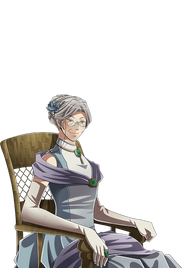