“I’m so glad to have made a friend here. I hope we get the chance to talk again soon.”
—Penelope

Penelope is a delegate from Wellin. See Also:

Sweet and shy, the Summit is Princess Penelope’s first real foray away from home. Penelope has a close relationship with her older brother, the Crown Prince. After being shown kindness she is quick to open up and is eager to make friends.

Like her brother, she is more handsome than pretty, but her face is sweet and her expression kind natured. She has long, straight, light brown hair, braided decoratively and she wears a simple coronet.

Princess Penelope stands with natural grace. At the summit she is shown wearing an elaborate silk gown in which she still manages to move easily, despite the long inconvenient train.

Princess Penelope is famous for being sweet, good-natured and having a kind heart. She has not traveled much, but she does have a reputation as being one of the kindest royals in the Seven Kingdoms. She is somewhat sheltered and as such is doomed to be out of her depths in the rough waters of the Summit.

While the MC observed her at the welcome feast, Penelope started to comfort a visibly nervous young lady.

The MC notes that in the current political climate, her kindness might make her get taken advantage of.

Before the summit, Penelope had accepted a political marriage to a duke she found rather displeasing, to the dismay of her brother, and joy of her father. Before she accepted the marriage, however, Lisle told her that she should at least go to the Summit first and experience what the world is truly like outside of Wellin.

If you are invited to her Week 5 event you are able to either tell her that she should or should not get married to the Duke.

During the introductions, an MC who has befriended Penelope can smile reassuringly at her and help improve her introduction.

Penelope will accept an invitation to tea or to a musicale. If invited to tea, she will bring a gift.

She can sometimes be found in the gazebo during week 1.

With high friendship, she invites the MC for breakfast. If the MC's relationship with Lisle is also good, he will show up too. Inviting Penelope to participate in the ship race and winning nets additional bonuses to approval from Wellin and the weavers.

Penelope will gift the MC a box of chocolates and a flower before the matchmaker's breakfast. If the MC begins a matchmaker-approved romance with Lisle, she will greet her enthusiastically at the ball at the end of the week.

Penelope is selected to be a juror during the trial on week 4. She can also be found in a special (non-secret) scene with Cordelia, at the gazebo.

Penelope will invite the MC for a friendly tea. She's also the default actress selected for the role of Serah in the theatrical, and may play across from a cynical (or neutral) MC as Vienna.

She says he's her only friend on the Isle other than the MC.

They have very different ideas about duty and responsibility, but they don’t argue. They just have very strong ideological differences [1]

If the MC is from Wellin she will admit to being familiar with her reputation and admiring (or envying) her independence and strength. 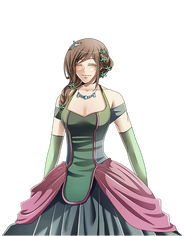