“You know I avoid the company of anyone over thirty. What if their responsibility and gravitas is catching and rubs off on me?”
—Leala

Leala is a romanceable character from Hise.

She was a kickstarter stretch goal upon reaching the $4000 mark. She will have a full romance route like any of the Matchmaker-approve delegates[1] that unlocks after players have completed a playthrough meeting certain conditions.

Leala is a pirate from Hise. She's Hamin's best friend and second-in-command who first appears in Hamin's POV. Not much is known about her, except that she apparently has snuck onto Vail Isle for the summit to keep an eye on her best friend.

Leala is confident, fearless, adventurous and cheeky. She is also said to be, above them all, incredibly loyal.[3]

She is also one of the lesbian romanceabless in the game.

Leala and Hamin's friendship stemmed from their toddler days, and they have been platonic best friends ever since.[4][5] She currently serves as Hamin's second-in-command at sea.[6]

They are probably acquaintances. They aren’t really friends but know each other due to the fact that Cordelia is Hamin's cousin.[7] 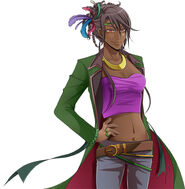