“Oh, I forgot. Is this the place where I am supposed to bow and scrape and give in because you are the highborn lady?”
—Kade

He was a kickstarter stretch goal upon reaching the $7500 mark,[1] and his route will unlock if the player has met certain conditions after completing a playthrough.[2] His romance route is neither full nor secret, as with Jasper's.[3]

While Kade's profession on the Isle is unknown, he is not a butler and was said to be "judged best suited for other duties".[4]

When they were both younger, Kade and Jasper were best friends. As they aged, however, their growing philosophical differences and Jasper’s increasing status as the Isle's golden boy cause them to drift apart and compete as rivals.

On the surface, Kade is a flippant dare-devil who just walks the line of acceptable behavior. Underneath there’s a lot more broiling.[5]

Kade is an isle native who looks both a lot like Jasper but is also very different. He has the same build, coloring and good looks, but he’s both harder and more willing to use his appearance.[5]

While not being involved in the main story, Kade will have a major story of his own. Romancing him will allow the player to gain knowledge of things that are going on behind the scenes/beneath the surface of the Summit,[6] though it depends if the MC gets to see him/interact with him/hear about him.[7]

Kade might have been the topic of Jasper and Yvette's secret conversation. Makes me wonder if Jasper wanted to break the oath and break Kade's nose altogether. He might also have caused the delay right before the self introductions.

Kade might have sent the letter that arrived before the matchmaker's breakfast with the Weavers' gift (see Gifts). (Speculation).

Kade is the mysterious servant that appears before the MC goes for the Banquet. He engages the MC in a conversation while Jasper is away, and bemuses that her safety and ignorance may not remain.

Kade: "Ah, MC of (MC's Nation). Unattended and alone here in the middle of my hallway. What a surprise."

Narrator: "At the deep, amused voice, you whirl around and find yourself faced with one of the Isle natives. But where Jasper's eyes are careful, this man's eyes are calculating, and where Jasper is unreadable, this man has a sardonic smile tugging at his lips."

MC: "Is this your hallway? Forgive me, I had no idea these halls were portioned out and sovereign."

Kade: "Ah, I begin to see why it is your name that is on everyone's lips."

Kade: "What a great piece of fate that has brought about this meeting. I have long been curious of you."

MC: "I wish I could say the same, but, you of course, have the better of me, as I do not yet know who you are."

Kade: "But whether your safety and ignorance will remain? Ah, who is to say."

MC: "I begin to suspect a man so eager to seem utterly mysterious has no secrets at all."

The unnerving man gives you the first genuine smile since he first spoke to you.

Kade: "I think you will find that everyone on this Isle has secrets. Especially those of us born here."

Kade: "Ah, but I see your gallant knight returns, once again wielding his fierce glare in your defense."

Narrator: "You turn around to see the man was correct, and an unhappy Jasper is stalking your way. His look is icy and directed behind your shoulder."

The first information regarding unlocking Kade as a secret romance was that the condition opens in week 4.[8] Given his involvement in the murder investigation, it's been speculated that the unlock condition is a perfect acquittal.

The names of the new romanceables are not, unlike the original confirmed characters, coincidental.[9]

From here, Kade could mean any of the following:

In Scottish, Kade means "from the wetlands" or a variant of Cade which meant "spirit of battle".[11] 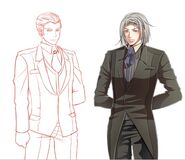