“Ah, you are here at last, my lady. My name is Jasper and I've been assigned as your personal butler during your stay here at Vail Isle.”
—Jasper

Jasper is a native from Vail Isle. He is the MC's butler regardless of any background the player chooses.

This intense and handsome island native has been assigned as your personal butler during your stay on the Isle. It will be his job to assist and help you. He claims to have no other goals, but can that really be true?

He wears a crisp black suit, with bright violet eyes, pale skin and hair so fine and light it reminds you of moonlight. He's also the third tallest out of all the introduced characters in the game.

Jasper's past is still a mystery, but he grew up and used to be best friends with Kade.

If the MC offers her maids breakfast he'll smile and appreciate the offer, but politely reject the food.

He attends to you immediately after the horse riding incident in spite of the fact that you have not even said anything about it.

He immediately stands in for the maids and confronts the drunk delegate. He will also step in for the MC, if the MC decides to stand up for her maids instead.

While in Story mode, if the MC fails her second interview with the Matchmaker he will give a passionate case for why she should stay.

If the MC is on his path he confides in the MC that she doesn't have to romance anyone. He'll confront and show his support of her decision after the interview.

He didn't wake the MC up when a delegate is murdered and tells her to stay in the room until it's safe to come out. He worries about the Mc getting poisoned, but he doesn't want the MC to worry about him. There's a dialogue option to ask about his wellbeing.

He'll provide the MC with information on what he knows about the murder to help with building a case. After investigating the crime scene & preparing for the case, if the MC explores the castle/the room the MC can have tea with Jasper.

Before the trial, Jasper may wish the MC good luck. While escorting the MC back to the room, depending on how the trial went and the relationship he will congratulate them.

If on his path, the MC can overhear a conversation between Jasper and Kade while in the Kitchen.

After receiving a threatening note and near-death experience, Jasper appears to escort the MC back to the room before the play.

Jasper is her butler during the Summit. If on his path Jasper will give the MC 3 gifts.

Jasper and Kade grew up together as natives on the Isle. Though they used to be the best of friends, their increasingly different political views and Jasper's status at the Isle's golden boy have caused them to drift over the years. They are somewhat rivals now.[1]

The Matchmaker seems to be fond of Jasper, and will go out of her way to give the MC a second chance should she fail on Story Mode, based solely on Jasper's insistence. 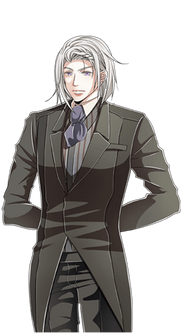