“I’m sure you are perfectly lovely, but surely you must agree our time is best spent elsewhere.”
—Gisette

Gisette is a delegate from Revaire. See Also

The princess of Revaire can easily be described using two words: charismatic and cold.

She can charm with the best of them but can freeze you out with a single glance.

She won’t be easy to get close to and understanding her and her true aims will be even harder, but maybe the right kind of lady will be able to make the ice princess melt.

Princess Gisette looks like she was made from moonlight. She has long, silver-blonde hair, purple-blue eyes, pale skin and a sharply angled face of chiseled perfection.

She has all the beauty of a masterwork sculpture and all the warmth of the same.

Her elaborate gown is tight and expensive-looking. She is small enough that you feel that a strong wind might knock her over.

It would be foolish to underestimate her simply because of her ethereal looks. She is as potentially dangerous or useful as her brother.

If MC was a widow, she notes from the stories she had heard, she knew better than to underestimate her simply because of her ethereal looks. She would be a very dangerous enemy and a very useful ally.

Otherwise, MC hasn't heard much of her, in particular, just whispers that she, like the rest of her family, will go to frightening lengths to preserve or gain power.

MC has the option to direct Princess Ana to Princess Gisette, gaining +5 in Manipulation and a bit of subtle personality.

Depending on MC's likeability, Princess Gisette's respect will increase accordingly.

Widow MC would be greeted with a chill note while other MCs would find it a perfectly mannered curtsy.

Princess Gisette invites MC for a late morning tea along with a number of her acolyte's minions friends, despite the MC expecting a one-on-one. She maneuvers the MC into spreading malicious, defamatory gossip about a minor Arland delegate named Estelle.

Gisette is involved in two secrets that can be discovered by exploring the castle. If she is being romanced, she can be found in the gazebo (after the horse ride) and the encounter gives +5 to grace and charisma.

She never accepts an invitation for the boat race.

With high enough romance, Gisette may automatically get vengeance upon Blain during the matchmaker's breakfast.

Succeeding in her romance causes her to wait for the MC in the corridor on the way to the final matchmaker interview and covertly question her about her intentions. She will later also approach the MC at the ball. If the MC chooses a political marriage and selects her name, the romance will continue. Otherwise, with the correct dialogue options and high enough manipulation skill, she will regretfully accept a friendship path.

A romanced Gisette will also send the MC a gift which increases charisma and people knowledge by +5, a bottle of her favorite perfume, with the following note:

“You commented once on how much you liked my perfume. It’s very rare and very hard to come by, but I managed to get you a bottle of your own. There are not very many people I would go to so much trouble for, so I hope you take this as the symbol of my affection that it truly is. I look forward to see how you handle this week’s challenges. I imagine luck with have very little to do with it. Yours”
—Gisette

Gisette is chosen as a Juror for the trial.

Crown Prince Jarrod is her younger brother. Their relationship is still a mystery given their limited interaction shown in the game and the POV, but it has been stated that they actually get along pretty well.[1] 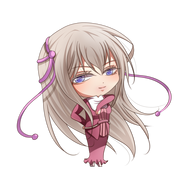 Gisette in the Gazebo