Blain (nickname Blain the Vain/Blegh) is a delegate from Corval.

Will it even be possible for you to soften his enmity? Or will your entire summit be shadowed with your first, very stubborn rival?

An unlockable Blain path was one of the stretch goals for the 7KPP Kickstarter.[1][2]

Lord Blain is handsome and primped. His dark hair is carefully oiled, his clothes have clearly been well-tailored to enhance his looks.

There is something about him that gives off the strong impression he is spoiled, entitled and used to getting his way. He occasionally tries to act pleasing (aka suck up) to the people he’s around, but that’s just fake.

Blain acts the same no matter who he is with. He might glare less at a person he tolerates, but he is definitely glaring at someone.

Lord Blain lives in the Imperial Palace of Corval. He is the Emperor’s godson, which gives him some leeway and protection. Except for the emperor himself, no one would really feel comfortable offing him. He’s an embarrassment to the Corval court, which is why the emperor saw the summit as the perfect opportunity for him to go be married elsewhere and become some other nations problem. Plenty of people tolerate him or find him amusing (like Zarad for the latter) but no one genuinely likes him.

He had apparently tried to flirt with Corval MC to ensure her support for his own appointment and she completely ignored him. Funny thing is that she doesn't remember it at all.

If MC observed the delegates from Corval, Lord Blain would notice her and send her a pointed glare. The young lord of Corval seems to have his eye on Princess Anaele, and has already taken MC into excessive dislike.

Upon being shooed away by his desired princess, Lord Blain blamed everything upon MC and turning her into a rival.

“If that were not enough, Lord Blain is seated directly across from you and spends dinner glaring at you with such a sour intensity, you have trouble enjoying your quite excellent food.”
—MC's monologue

Princess Ana threw a piece of bread at him for his rudeness, whilst Avalie gave MC an appreciative smile as MC deftly turned a boorish insult from Lord Blain into a compliment to herself.

Lord Blain sent a letter to MC, declaring his rivalry once more but in words.

“I just wanted to make it clear on no uncertain terms that whatever villainous spell you have cast on the fair princess Anaele will not long work. Soon I will have secured her heart and you will have been sent back home in shame. I suggest you stop embarrassing yourself further and instead of believing any empty flattery she may have given you last night instead stay far from her. Preferably downwind so neither of us are forced to endure your stench. Never yours, Lord Blain.”
—Lord Blain's letter

“Lord Blain has refused your invitation. The words he used...are not appropriate to be repeated. Suffice to say, we should all be glad he is not coming.”
—Jasper Lord Blain will never accept any invitation from MC.

Picking Katyia's footsteps as MC's ambition will decrease his rivalry.

If MC has done the Summit introduction perfectly or at least successfully, his rivalry will decrease further.

If MC was likeable enough, she won't be dismissed from the staff quarters which allowed her to eavesdrop Lord Blain's blackmailing attempt with the Matchmaker.

If MC sent an invitation to Lord Blain, he won't accept it but his rivalry decreases slightly.

“Lord Blain has expressed that he is hoping for an invitation from other parties and thus refuses yours.”
—Jasper

The Dowager Countess and Princess Jaslen had bet that Lord Blain would be the last person to reach the horse riding event. Strangely, he wasn't, much to the disappointment of the two chaperones.

“It is then that Lord Blain stumbles out bleary eyed and scowling, but to the disappointment of Lady Yvette and Princess Jaslen he is not actually the last delegate to arrive. That honor goes to one of the female delegates from Revaire, who decided that the finishing touch to her routine should be a hat filled with colorful feathers at least a foot high each.”
—MC's monologue

Sending him a cravat pin is the best gift, as it decreases his rivalry more than the other choices. A heartfelt letter is the worst gift for him to receive.

MC's number one rival is back, though 15 minutes late for the breakfast. MC can either turn him into a rival with burning hatred once more or have him become a much friendlier rival. MC can gain a +5 insight if she picked the third choice.

All was going well till The Matchmaker decided to praise MC which Lord Blain 'congratulated' her with a 'cheer' to her dress. Really. If Gisette had some romance with the MC, she will avenge for her by giving Blain a taste of his own medicine.

He was briefly mentioned in Clarmont's date, which Clarmont joked about Lord Blain hiding in the shadows, ready to throw a pie at MC's dress.

“Lord Blain has refused your invitation. The words he used...are not appropriate to be repeated. Suffice to say, we should all be glad he is not coming.”
—Jasper Lord Blain will never accept any invitation from MC, the same as week 1.

He is a part of the jury for the trial.

Lord Blain seems to have already taken the MC into excessive dislike right at the stars of the summit. He makes it clear she is on his bad side by staring eye-daggers at her. He thinks the MC has unfairly gotten attention and success when she doesn’t (by his standards) deserve any of it. He’s never, ever going to like her, let alone fall in love with her. He really, really doesn’t like her. Really.

None of the MC's (excluding Corval MC) have ever heard of Lord Blain before the summit.

He isn't a romanceable character for the MC because the creator wanted to make sure there were people in the game who liked women but could never like the [[1]], to make things more realistic.

It is possible to make him hate you less. True friendship? Not so much in the cards. He’s not lonely. Confused as to why people seem to prefer you to his obviously much more fabulous self, perhaps, but not lonely. (He’s kind of a more surface kind of dude, so you don’t have to worry about him too much. His ego is resilient.) [3]

Of all the people who became bitter towards Corval MC after the campaigning on her behalf, and subsequent selection to be part of the summit, none were more bitter or angry than Lord Blain. He has attempted to flirt with Corval MC before in hopes of having her use her influence on his behalf, and she was completely immune, which wounded his ego.

The young lord of Corval seems to have his eye on Princess Anaeale. He attempts to woo her and has not been very successful.

If there were more crown princesses among the delegates who would be inheriting the throne he would probably bump Ana down the list and go after another princess first.

Lounging on the sofa. 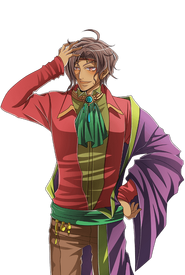