You have worked hard to claw your way out of poverty and obscurity. Now you are a wealthy widow and a favorite of the Revaire court. It is this position that has allowed you to be selected as one of your country's delegates to the Summit. You couldn't be more anticipatory. For the next seven weeks you will have the chance to climb to even greater heights. Forget widow, soon you might be a queen.

“How very far you've come. And yet, how very far left you have to go.”
—Narrator

The only requirement for unlocking the widow background is an ambitious personality.

The Revaire MC gains a boost of 25 to Charisma, Cunning, People and Politics. This results in an increase to the skills of Persuasion, Likability, Quick Wit, and Defensive Instinct after creation.

She will start off with 200 Gold and roughly 40% of the approval of her country's royals.

Though her family was noble and her parents were very concerned with the consequence of the family name, they were poor and often went without food. Despite this her parents went into great debt in order to maintain the appearance of nobility. This forced the MC to make a political match with a much older man in order to bail her family out of debt. After her husband's death (whether by her hand or not) she arrived at the Revaire court and climbed her way through the high society, determined to improve her lot in life. She arrives at Vail Isle saying that though her maids do not recognize her name, soon it will be well-known.

She receives a bouquet of red flowers along with an anonymous blackmail note, threatening to spread rumors of her husband's (alleged or real) murder if she does not cooperate with murdering someone on the blackmailer's behalf. This scene occurs regardless of the MC's ethics and whether or not she truly murdered her husband.

The MC receives a letter from her mother which stresses that the entire family depends on her to make a good match at the summit, because debt collectors are after her father.

A red flower and an anonymous note are hidden in plain sight. The note contains the MC's supposed target, a minor Revaire delegate named Emroy.

Your family consists of your mother, father, and eight younger siblings (mostly sisters.)[1] The relationship with your parents is strained as they have laid heavy burden upon burden on you as their eldest, forcing you to marry an old man to pay off their debts while raking up even more during your stay at the Summit.

You haven't had much interactions with the prince personally, but you are aware that women throw themselves at him and that he remains aloof and distant from them.

Like her brother, you have no former interactions with her but you have heard stories of her particular skills in the past. She is a dangerous enemy and a very useful ally.

While you were busy attending the parties held by the noble class, it seemed that Clarmont was busy avoiding them. He has the reputation of being overly serious and a bit of a mystery as you are unable to discern how he got the support of the Revaire Royals. 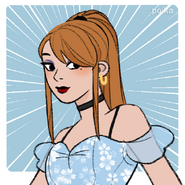