"You grinned your greetings at the servants hoping that they, unlike your servants at home, wouldn't nag at you about the proper way to curtsy."

Opening her background requires: courage, knowledge of warfare, and self defense.

"Apparently I'm just strange enough I might appeal to all you heathen barbarians. Then they win twice. Get an alliance, ship off the resident embarrassment."

The Countess's mother died when she was small, which she tells Ana on her week 3 date. She was raised by her father who was responsible for her provincial and rather liberal upbringing, running around in the mud with her dogs or climbing trees to escape her nannies. After her father's death she inherited the Holt estate and title and was forced to spend time at the royal court. The countess tells Lord Clarmont a story from her childhood, about having owned a belligerent pet dog that gave birth to a litter of ill-behaved puppies.

Holt is a moderately large province in the middle of fruit/farm country. Usually it’s pretty well off, but lately a series of bad crops have pretty much emptied it’s coffers. It’s people are very loyal to the TC’s family, who have done right by them for generations. By the rest of the nobility’s standards, both Holt and it’s people are helplessly provincial, but the TC family has always thought their people come first and politics…only when they couldn’t avoid it.[1]

Wellin MC avoids the court as much as possible, mostly because it's boring. She has however, met most of her fellow delegates, although she can only recognize the Crown Prince and Princess by sight.

"Apparently he knows who you are, which is not what you expected."

Wellin MC met the Prince at the summit for the first time. She hasn't heard many rumors of him, which she finds unusual as Wellin Ladies tend to gossip so much that even she ends up hearing most of the rumors about her fellow countrymen. She knows he is said to be careful and somewhat quiet about his personal opinions and personal life and that he is very serious about his duties to Wellin.

Wellin MC thinks he sounds nice, but she doesn't think he's her kind of person. Everything she has heard about him makes her think he's a little boring.

"I have always wished that I could be as strong and brave as you are."

Wellin MC met princess Penelope at the summit for the first time. She notes that Princess Penelope is famous for her kind heart and good nature, however, like her brother, she finds her a bit boring and too traditional.

While the Grand Duke was incredibly active in court, Wellin MC avoided both him and court as much as possible, so they didn't exactly know each other. When his son tried to court MC, he ended up falling off his horse and nearly breaking his neck, which the Grand Duke was less than pleased about.

Wellin MC thinks it's probably better if she stays out of his way.

Wellin MC knows things are tense between Skalt and Wellin, she doesn't understand why though. She rather admires the female warriors of Skalt.

At the welcome feast she wonders if she should have maybe been born across the border, instead.

The countess keeps her lands and titles regardless of who she marries. The only thing that will take them away from her is death or being declared a traitor to Wellin and having her lands seized by the crown.

She already has a steward :) Most big landowners do. They deal with all the day to day stuff, generally.

She got the title because her’s is one of the few that can go to a female heir. Since she had no brothers it went to her. But since she is a direct descendant of her father, it goes to her over, say a cousin. (Of which she has a few.)

If she has no natural children, her estates either revert to the crown if no-one is deemed a close enough relation to inherit, or goes to the next heir.

In order for any adopted children to become the heir they have to get the approval of the ruling monarch of Wellin before the Countess dies. Since inheritance is lineage based, she can’t just appoint an heir for the lands/titles, although she can for any personal fortune. 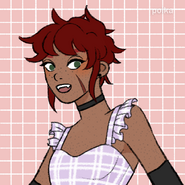