The foremost duty of all the daughters of the royal house of Arland is to marry for the benefit of their nation. As such you have been training for this day since you were born. As one of your nation's delegates you know it is your every duty and expectation that you will secure a marriage and alliance that benefits your nation. You can only hope you succeed even half as well in living up to your duties as your sister did in living up to hers.

The hardest background to unlock due to many restrictions, such as being unable to have warfare knowledge, street smarts knowledge, self defense, courage, cunning, manipulation, or a cynical, ambitious, or overt personality. The princess has to have Arland court approval, she needs to specialize in etiquette and automatically has a dependent personality as well. She must also wait to be introduced to her maids.

Upon creation, the princess will gain etiquette (+35) and some knowledge on politics and people (+15 each). Because of her upbringing, she will be traditional and very dependent. She will start off with 100 Gold.

The princess has an older sibling, Constance, and a younger brother, the unnamed Crown Prince of Arland. Her father is the King while her mother is the Queen.

“If there were two words that were sacrosanct in Arland they were 'tradition' and 'duty'. For the royal family, that goes at least double.Tradition and duty. That is how you find yourself alone and frightened on Vail Isle. To fulfill your duty to crown and family by forming a suitable match and marrying to seal an alliance.”
—SP!MC monologue The Princess has an inferiority complex in regards to her sister, believing she would not even meet half the standards that her older sister had set during the last Summit.

“Princess! I'm happy to see you again! Do you remember that we used to play as children? It's been a while, of course, but I've always considered us friends. And I'm glad if we have to be here, we are at least here together.”
—Childhood friends.

The princess noted that most of the delegates from Arland are from minor houses. She thinks her father was probably doing his best to increase her own chances of making a favorable match.

“I can hardly believe you are your sister's sister. An Arland princess should be so much more prepared.”
—Matchmaker “You can feel the tears welling as you fight to stay serene. You knew you couldn't live up to your sister. But this...You had no idea how much you would be found wanting. It seems your fate is to be your families biggest disappointment. You don't manage to stop a few upset sniffs from escaping.”
—SP!MC monologue

One of the princess's possible motivations during the Summit is to advance the cause and welfare of her nation, Arland, as much as possible. This can be achieved through alliances, marriage and negotiation. It is most important that Arland's particular issue is successfully resolved.

During Clarmont's date, the princess revealed about her past

“When I was young, maybe six or seven, there was a festival in the capital. There were to be fireworks and traveling entertainers and food stalls in the streets. Of course, as the second princess and still a child in the nursery, I was, of course, to be stay inside. But one night, my nurse fell asleep early, and my older sister snuck in, wearing a disguise. She shushed me, put me in the outfit of a servant boy that was so long on me it dragged behind me and snuck me out into the city. ...it was the only time I ever got to go out into the world, not as the princess, but just as myself. All the sights, the smells, the sounds, all the people. It was magical, that night.”
—Princess's happy story

During Zarad's date, it was revealed Constance is not in any immediate danger.

“I can tell you that she still keeps you in her thoughts and prayers. The rest of your family, perhaps not so much. But you, you she remembers fondly.”
—Zarad

During Emmett's date, the princess noticed that Emmett had changed a lot, as if he was a different person.

“Noticing your distant train of thought, Emmett sends you a gentle, reassuring smile that you remember from when you were a shy child and he would protect you from the other loud children.”
—SP!MC's monologue

“You know that the alliances forged with your many ancestors and relatives, the Princesses of Arland, would make any such threats impossible. Were Arland threatened, you have no doubt many of the other nations would stand together against Revaire. It is the reason your father has always reminded you of the importance of your duty.”
—SP!MC's monologue

“To my beloved sister. I wish I could hope that this letter will not reach you, but I know better than to hope for the impossible. I know that you will have been chosen and sent to represent Arland at this delegation. But still, I can hope that you will heed what I write for ensuring this letter reaches you safely and unread has cost me almost more favors than I can afford. I want you to forget everything you have been raised to believe, everything you think about your duty as the daughter of House Arland. I have come to learn the most painful lesson that no moment of duty is worth a lifetime of misery and unhappiness. It is too late to change my own fate, but it is not too late for you, sweet sister. If I could wish for anything, it would be that you do not bow to whims of our father, but instead seek out your path, your own freedom and most importantly, your own happiness. I love you and my thoughts are with you always.”
—Constance's letter The Princess received the most baffling of letters from her older sister Constance. Not only is she involved in some sort of unhappy intrigue, but she urges the princess to abandon her duty to Arland and use the opportunity presented by the Summit to pursue her own path and happiness. This sounds nothing like the sister the princess used to know. The princess can't even begin to fathom what to think.

During her dessert dinner with Avalie, Avalie shows her concern about the Princess coping with the Summit.

“We all have our own burdens to bear. Perhaps ours have more in common than it first appears.”
—Princess having enough interpersonal insight

The princess finds Zarad and anxiously asks him about her sister.

“I can honestly tell you that being happy and being married to my brother are two states that will never coexist in the same world.”
—Zarad

She gathered her courage and asked Prince Zarad about her sister. She didn't learn much, but enough to believe she is well and truly miserable. The princess has no idea what to do. Should she follow her advice to follow her heart? Or follow the path she has been raised to walk on since she was born? And is there anything she can do to help her sister?

During a conversation between an Arland delegate and a Wellin delegate, the princess found herself stuck in their debate.

“Duty?”
—Emmett Still confused about her sister's letter, the princess talked with Emmett about duty. She didn't manage to get any more answers, however she felt like she was going to have to come to some sort of conclusion soon.

During her date with Emmett, Emmett reassured the princess about her happiness.

“But I think...I think you will be able to make a home for yourself, Princess, wherever you end up. If...if your heart is there. If you are happy, it will be home. Because that is who you are.”
—Emmett

During her date with Lyon, the princess expressed her love for books.

“I could always read books. That's where I learned about things I wasn't taught, things I couldn't see.”
—SP!MC

During her date with Clarmont, he wished the princess would stop underestimating herself. The princess also expressed that there aren't many nice princes around when Clarmont asked if she has to marry a prince.

“I...I think they expect me to marry well. For the sake of the people of Arland. But...I don't think it has to be a prince.”
—SP!MC

During her date with Ana, the princess was jealous of Ana's bravery and courage.

During her date with Hamin, he joked about the Arland countrymen trying to rescue the princess away from him.

“I'll take that as a yes. It's true that you weren't born or raised the way I am used to, or used to admiring. But despite everyone's attempt to keep you trapped in a small cage and trim your wings, now that you are free and forced to fly with no lessons on the matter you are growing strong and doing it. You are taking your broken wings and healing them and learning to soar on the winds. I...I'm not sure I could do the same in your place. And I am very glad to see it.”
—Hamin confessing his admiration for the princess

During Lisle's date, the both of them brought up a point they are very familiar with - duty.

“Duty....duty has been behind every decision made for me my entire life. Including the ones that brought me here”
—Princess's reply to Lisle's question about duty.

During her date with Zarad, he revealed a story from her past. 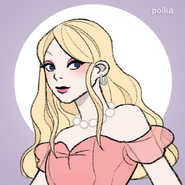