A Minor Lady with a Scholarly Bent

"It is unfortunate that we are both forced into a situation so far from our natural competencies."

Opens on selecting intelligence in the background opening.

She tells Clarmont a story about the time when she first learned how to read, and discusses her preparations for the summit with Zarad, on their respective week 1 dates.

On Zarad's week 3 date, he tells a story about her helping to defeat an Onvu champion by making a clever suggestion, as a small child.

Jiyel MC has never met him before the summit. At the welcome feast she states that she isn't certain how she feels now that that is inevitably about to change. She notes that the General has a reputation for being fierce, determined and capable.

Jiyel!MC gets sick really early on, and her symptoms are subtle and easily could be interpreted as stress. So while Jasper gets a feeling something is going on, but no, he doesn’t even guess at what really is happening.[1]

Jiya is the MC's cousin, who was originally meant to be a delegate, having passed the entrance exams. Her sudden marriage leads to her being replaced with a (possibly reluctant) MC. 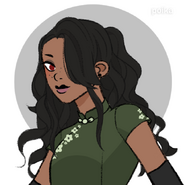