From the Lion's Den[]

"I was born into the inner court. My mother had both the blessing and the misfortune to be one of the Empress' favorite ladies."

The daughter of the Empress' favorite, you have spent most of your life under the uncomfortable scrutiny of rivals. Thanks to a successful political campaign and your well thought of, but expendable position, at court you were selected as one of the delegates for Corval. You have a sinking feeling that both the rivals and the political snarls you will find during your seven weeks here will be worse than anything you have seen before. And considering where you came from...

Unlocked upon choosing at least one option that gives a Political Knowledge boost.

The Corval MC gains 25 eloquence, as well as a 25 knowledge boost to both people and politics, resulting in an increase to persuasion and interpersonal insight skills. Because of her upbringing in such an environment, her personality will lean towards the ambitious end. She will start off with 150 Gold.

"You smile brightly at the servants. If life in the Corval Court has taught you anything, it's the fact that nothing is more dangerous than the servants who know your secrets."

Bits and pieces of the MC's past are revealed throughout the game, most notably when the MC goes on dates with certain characters.

The MC had grown up learning that every single word and action can and will be used against her and her family in the Corval court. In her pre-teen years she had also been tasked by the Empress, along with the other ladies, to find out the sender of a series of lovesick poems sent to one of the princesses. She was the one who eventually solved the mystery, but instead of reporting everything to the Empress she redacted information and sent the poet out of Corval in an act of kindness.

It is revealed during Zarad's week 3 date that she was directly instructed to befriend Constance shortly after the latter's marriage to Zarad's brother. Rather than attempting to leverage this into power for herself, she snuck herself and Constance out of the palace in disguise and showed the Princess the non-palace side of Corval. If Zarad's story is to be believed, Constance was extremely touched by the gesture and started to find things to like about her new home.

If the Corval MC chooses to observe Jaslen, she will note that though the Princess is a familiar sight known for her frivolous gossips, she must have more steel within as a veteran of the Corval Court.

Upon observation of her fellow delegates, the Corval Lady will point out that they are dressed extravagantly. She will sigh, and think to herself that it feels right at home with the politics and rivalry going on.

"Truly, I don't understand why you could have so many obvious flaws. Isn't your court supposed to excel at polishing weakness, or at the very least getting you killed if you are hopeless?"

The Matchmaker will note, rather harshly, the disparity between what she expected from the Corval MC and her actual flaws, and then ask her to leave.

"You are used to people being cruel, or disliking you. Not, perhaps, (with perhaps the expectation of Lord Blain,) as bluntly as the matchmaker. But this is different. This isn't normal politics and rivalry. You can't help but feel the weight of the fates of your family and court supporters. If word reaches the Emperor about what happened today..."

One of her possible motivations during the Summit is to advance the cause and welfare of her nation, Corval, as much as possible. This can be achieved through alliances, marriage and negotiation. It is most important that her nation's particular issue is successfully resolved.

During Clarmont's date, a memory of her past is revealed.

"When I was young, perhaps, thirteen, one of the princesses kept receiving anonymous love letters. The Empress wasn't exactly happy that someone had the gall to court the Princess, and certainly not in such an indirect, anonymous way, but at the same time, she couldn't exactly directly interfere in the matters of teenagers. So she gathered a small group of young women, daughters of the ladies she trusted and hinted in a very roundabout way that she would be very pleased if someone solved the matter of the letters."

During Zarad's date, he revealed that her mother had helped him out once in the past.

"Luckily for me, your mother was the one who noticed me. The Empress hadn't yet made her appearance, but there wasn't enough time for her to shoo me out, so instead, she told me to be quiet and hid me under her skirts for the entire tea."

—Zarad recounting how Corval!MC's mother bailed him out of trouble

After being awakened by a poisonous incense used by the assassins of the Imperial Family of Corval, the MC receives a disturbing letter that threatens the safety of her mother while she is away from court and the Empress' protection. The sender instructs her to snoop out as many secrets as possible as "fitting tribute" to guarantee the safety of her mother by the end of the Summit.

A Hint of Incense[]

Following the little threat she received last week, the MC will stop by a Corval trading ship and charm the Corval merchants in order to learn more about the incense she encountered previously.

As the Corval MC has one of the ocean-facing windows, she notes the return of the Corval traders and goes to meet them by the dock. The merchant tells her that the incense is something that is not easily available on the Isle, and the MC thus rules out Zarad as a possible perpetrator. Settled on the fact that her enemy is in Corval, she vows to comes up with her own counterattack soon enough.

During Ana's date, the MC reveals more about her past on Ana's request.

"It was a strange way to grow up. I was never allowed to be just a child, not truly. Everything I did was a reflection of my mother and the eyes were always on us."

—Corval!MC telling Ana about her past

During Emmett's date, he notes how much there is to like about both Corval and the MC beneath what is shown on the surface.

During Hamin's date, the pair bickers over the romantic nature (or not) of their date, seeing as their respective countries are on the verge of going to war with each other.

"Oh, you are delightful. We used to gossip about what you must be like, you fancy hidden court ladies of Corval. But the reality is so much better than our imaginations. Even without the sheer veils and the monkeys."

—Hamin, about Corval and its ladies

During Lisle's date, she tells him that her obligations and duties are nowhere as heavy as his, and he notes that she is expectedly skilled in turning the questions back on the asker.

During Zarad's date, he tells a story that gives the player some details on the MC's past with Constance.

"Once upon a time there was a young girl who bloomed secluded inside a great palace. This young bloom was told to befriend a foreign flower, who was struggling to adapt to her new life as the wife of a cruel prince. Many flowers in her position would use this position to make sure she got the best soil. But this particular bloom took pity on the new princess. Seeing her withering inside the confines of her new pot, the flower made a plan to sneak out the princess. This was a very dangerous plan, for none of the gardeners liked it when the flowers left their garden. But our brave young bloom did it anyway, securing a disguise so they looked like vegetables instead of flowers.In the end they were never caught and the foreign princess, touched by the show of friendship and seeing much to admire in her new home now that she had seen outside the garden, managed to plant some roots."

During Clarmont's date, he points out the MC's ability to evade giving straight answers to questions, and how much he doesn't know of her life before the Summit.

"So I don't know things like if they teach you to be so good at evading straight answers, or if that is a talent unique to you."

During Lyon's date, the MC reveals to him that that she is trying to change her fate.

"Who says I'm not? Change doesn't have to be loud to be effective. And changing my fate, maybe more than that is why I'm here."

The Corval MC's parents were an arranged match by the Empress. They didn't spend much time together due to her duties in the Inner Court, but they didn't particularly dislike or like each other either. Not much is known of her later father, except that he passed away when she was very young. She doesn't really remember him. [1]

Her mother is a lady ranked very high up as one of the Empress' favourites in the Inner Court. Not much is known of her yet, but it's clear that the Empress exercises a high degree of control over her life. She appears to be brave and compassionate - Zarad's week 1 date with a Corvali MC reveals that she once helped a young Zarad hide from the Empress by hiding him under her skirts during tea, presumably at personal risk to herself.

The mysterious letter that the Corvali MC receives during Week 1 of the Summit implies that she may be in danger if the MC does not satisfy the sender's requests.

Corval MC is familiar with her, although Jaslen never bothered to acknowledge her, or any other young ladies of her generation.

Before attending the summit, Corval MC never got to know the third prince very well, as she was firmly ensconced with the respectable ladies of court and their favorites and prince Zarad only attended events with much less respectable guests. The two of them didn't move in the same circles.

Corval MC knew the rumors about him, but never gave them much credence. In Corval, to have as uniform a reputation as the Prince meant you went around carefully cultivating it. She believes that if he could do that, he was much more than he seemed.

Of all the people who became bitter towards Corval MC after the campaigning on her behalf, and subsequent selection to be part of the summit, none were more bitter or angry than Lord Blain.

The MC herself isn't entirely sure why he's taken her into particular dislike. She has heard one rumor, that amused her, that lays his dislike on the fact he tried to flirt with her to ensure her support for his own appointment and she completely ignored him. She doesn't remember it at all, which makes the whole thing vastly more amusing. 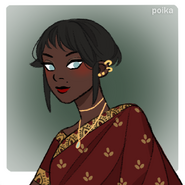